A Conversation with Dave Barr

So you’ve spent more than eleven hours in extreme pain from the injuries caused when a land mine blew up the vehicle you were riding in. Your body is badly burned and your legs are severely injured. The only reason you’re not dead is that a maverick chopper pilot took a chance that he wouldn’t run out of fuel and made an unauthorized pickup to get you to a hospital. For most humans, that would be enough for them to question their faith and ask “Why me, God?”

Dave Barr is not like most humans. Despite having parts of both legs amputated as a result of that war incident back in 1982, he has gone on to set two Guinness World records for long-distance motorcycle riding and is a staunch supporter of causes for veterans and the disabled. He didn’t ask, “Why me, God?” but he did ask, “What now, God?”

Dave was recently in the Tampa Bay area to participate in a Poker Run and Rally that was put on by the Patriot Express to raise funds for Operation Military Embrace, a Texas-based organization whose mission is to assist America’s seriously injured and ill Warriors and their families.

Dave explained, “We support the veteran’s families. The families send somebody off one way and they get them back another. There’s a lot of stress put on marriages, the veteran comes back and they can’t hold a job and have a disability and the families suffer as well, both financially and in other ways. The Patriot Express is a money-collecting organization, no one is paid, state captains, myself, we’re not paid. We do this out of a sense of patriotism. We’re all a part of this war effort and this is our way of being apart. We support Operation Military Embrace, they meet the physical needs of the families when they get a loved one back that is in need. Then there’s the Service for Humanity Foundation which works at keeping marriages together. They counsel the entire family - children, wife, and veteran. When there’s PTSD involved, there’s an 86% chance the marriage will end. When there’s a disability on top of the PTSD it’s pretty much over. This is why we’re having so many suicides. The families need to know that we stand with them. We won’t let happen to them what happened to us when we came home from Vietnam. We’re there to say we care and we help. We’re going to do our best with a lot of other great organizations to make sure your life is what it should be for your services.” 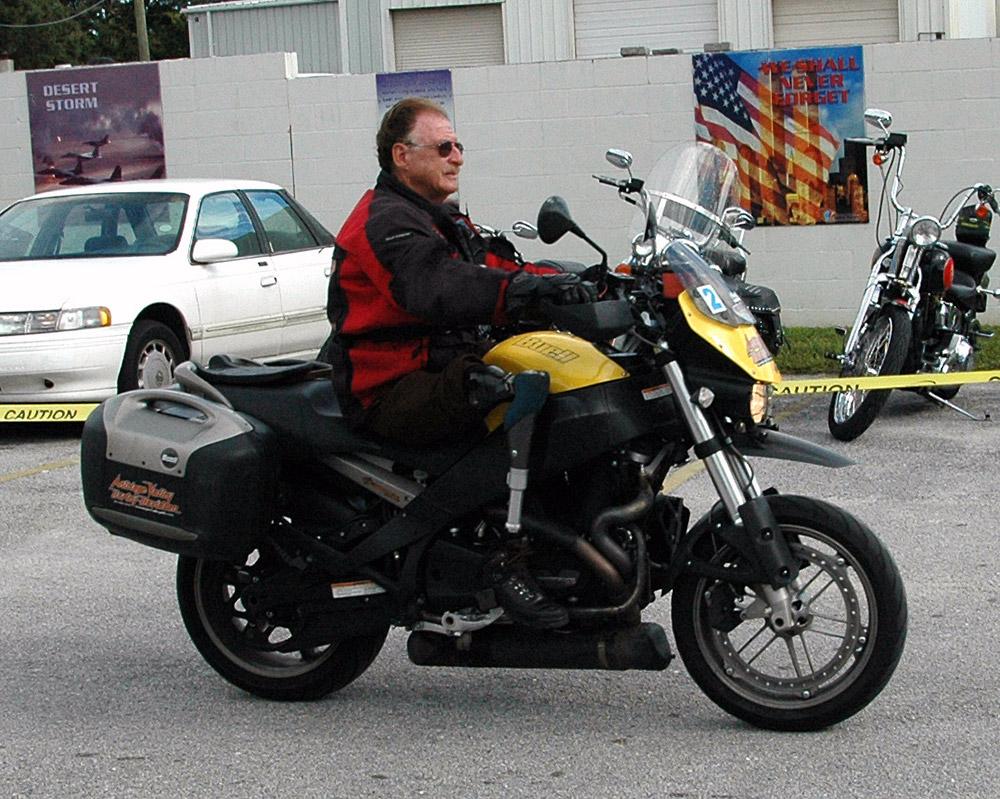 Dave told me his return from fighting in Viet Nam wasn’t at all what he expected. There was no hero’s welcome for the returning troops (Dave earned 57 air medals while there as a crew member on a helicopter gunship) and even his girlfriend, who he intended to marry, dumped him upon his return. “I fought the war and it was right. I got home and just got smacked around. My mother and father were only too happy to see me go back to camp at the end of my leave. I really had a hard time with the Marine Corps with everything that was going on in the early ’70s. There were a lot of racial problems. The thing is I got out bitter and angry. They took a victory and turned it into defeat. Like many, I was very bitter. I could not stand living in the U.S.”

One thing Dave did know was that he still wanted to be a soldier. His father fought in World War II in the Navy and was at Pearl Harbor, he also had uncles who had served in the military.  With them as role models and after reading the book, Battle Cry by Leon Uris, when he was about twelve years old, Dave set out on a military path that he has never regretted taking. “Life is about decisions, serving things, and being a part of things. And sometimes those decisions we make as a very young kids will see us straight through to the end of our lives. And that’s been the natural progression for me.”

After the USMC tour, that path led Dave to Israel. Though he wasn’t Jewish, he managed to become an Israeli citizen so he could join the Army. But things didn’t quite work out as planned. “I wanted to be in tanks, I like machines. And a tank is a big machine with a big gun. But I got transferred to the paratroopers; I didn’t really want to go. They took me because they said they didn’t have anyone who had been in the Marines go through their training which is absolutely the most brutal training. It goes on for 14 months. Just the selection course to get in is two weeks. It’s nothing but two weeks of being punished. No sleep. Even the SEAL selection here has five days they call Hell Week, this was two weeks. I’ve done three selections in my life. I didn’t want to go. I wanted to go into tanks. But I went and actually graduated as the Honor Man for Battalion 890.” It wasn’t until 2011 when Dave returned to Israel for a television profile about his life that he divulged his illegal immigrant status.

After Israel, Dave joined military forces in Zimbabwe/Rhodesia and then South Africa where he was involved in the land mine accident. That was when he started asking “What now”? “Because I’d been a soldier and I’ve been serving something all my life. I’d been in four Armies, and fighting communism or Islamic terrorism. My life had a purpose and a direction, Freedom. The idea of freedom, to propagate it, not only for Americans but elsewhere in the world, so people can live free of tyranny. So I acted on that. So what now? I knew, just as everything has a beginning, it has an end. I spent nine and a half months in a hospital and then I went back to finish out my time. Never took a day off for rehabilitation or anything. I trained machine gunners and my specialty was heavy machine guns and light LMG’s. I repaired machine guns, and when we were up in Angola I did on-the-spot training but I also did repairs in the field. I brought a bag of parts and I’d cannibalize parts and I’d have my tools and I’d get up there and find a broke down machine gun and instead of that gun coming out of service and that firepower being lost, I would fix it on the spot.”

After finishing his enlistment in 1982, Dave headed home again where he faced more discrimination as a disabled Vietnam veteran. But he had his 1972 Harley-Davidson Wide Glide in the garage. He and his dad put it back together and had the dealer install an electric start. Dave says the first few moments were a bit shaky but any fear was overtaken by the joy of riding and it was then that his vision of riding that bike around the world first came into view. That was when he knew, what now. “I know that there’s nothing by chance. There were other vehicles that rolled over that land mine but it was set by a ratchet number and boom. I knew why it was the left rear wheel. I knew why it was me. God said to me you’re finished with this now, I have other plans for you. Follow my will; He doesn’t care if it causes us pain to put us on the right path. What He cares about is us doing His will. He’s the Master of the Universe.”

Of course, everyone told Dave that his idea was foolish and impossible and it took him another seven years and nine months from that point to actually get on the road but once he started there was no doubt in his mind that he would finish. After all, good things come to good people.

During Dave’s first journey around the world in 1990, he started out at the southern tip of Africa and headed north crossing the Sahara Desert during winter so the temps were only about 100 degrees. During a layover in London, where he worked in a small motorcycle shop, he made the acquaintance of Lord Leonard Chesire. Lord Chesire was a British war hero who founded a charity to provide homes and assistance for disabled persons. Lord Chesire was impressed with Dave’s journey and asked him to stop in China and Russia at two homes for disabled soldiers. The friendship proved fortuitous to Dave as a year later when he was broke and broken down in Brazil he called home to let his mom know he was ok and she told him about a $5000 check that had just arrived from Lord Chesire. As Dave recalls, “The whole journey was like that and I just kept faith in it. Every time I’d be about to run out of money, it would just appear out of nowhere.”

With all the obstacles he faced, I asked Dave if he ever considered quitting. “No, no one asked me to do it and for years people told me you’ll break yourself financially and maybe kill yourself out there. Maybe maim yourself or worse. Believe me, it almost came to pass several times. The thing is, no one asked me, but I knew that was what I was supposed to do the first time I rode the motorcycle. It took me seven years and nine months to get on the road from the time I conceived it. Once I started it I never ever thought of throwing in the towel no matter how grim, broke down in the snow, the mud, the heat, the sand, wherever it was in the world, twenty-six flat tires, I never thought about quitting. ”

Well, Dave, did you ever think about riding something besides a Harley on this trip?

“I could have picked a better motorcycle, but it never would have drawn the attention. I was in the Amazon and people knew what a Harley Davidson was. I went into one place and the guy had a big Easy Rider poster on the wall. I was in a petrol station in Brazil and getting ready to leave when all of sudden a crowd got in front of the motorcycle. I didn’t feel any malevolence from them; they just didn’t want me to go. I said what’s the problem? Problema? No. TV. They had called a television station and they came out to do an interview. Afterward, we were all shaking hands, and off I went.”

Though Dave gets credit for making his record-setting rides alone, he’s quick to point out that on many occasions he wouldn’t have accomplished his goals without the help of others. I’d like to believe that’s good karma coming back to Dave for all that he’s done and all he will continue to do. In his own words, “Life is not just about us. God didn’t put us here just to be comfortable and have a good time. There’s more to it than that. For me, being a Vietnam veteran, and what we came home to, guys like me will not allow our veterans to come home to that again.”