Have you ever thought that there's got to be a better way of doing something? That's what I was doing as I sat in a long line of traffic waiting for the light to cycle us through a busy intersection. I was tired of breathing exhaust fumes and was getting an urge to slip around and between the stopped vehicles to get me to the front of the line. With my luck, there would be a cop sitting somewhere up ahead and I really don’t need a ticket. Or some rude cager will see me coming and decide “it's time to teach that biker dude a lesson” and narrow the gap. Neither of which would have been good for me.

Making that move isn't legal in Florida but if you’re an international traveler you’re aware that many places in the world allow and encourage the use of lane filtering, aka lane splitting, white lining, and other such names. In most of those places scooters and motorcycles do make up a larger percentage of the commuter traffic but perhaps it's time America got on board with the rest of the world. Maybe more people would ride to work if they knew a motorcycle might give them a traffic advantage.

They’ve been doing it in California for years where it’s not actually legal but it’s tolerated. CHP actually published some safety guidelines for lane splitting but they had to be retracted when someone, likely, not a rider, complained that the state was promoting illegal activity. Again, one of the impediments to motorcycle safety is the non-motorcycling public.

Other states are considering their options when it comes to lane-splitting. Utah is leading the way with a Motorcycle Lane Filtering law which went into effect in May 2019. You're allowed to do it only on roadways with a speed limit under 45mph, between stopped vehicles, and you can't exceed 15mph. It's a safe way of doing things if everyone follows the directions. There are a few other states with proposed legislation and while it's not legal, there are some states, and some law enforcement officers, who don't always enforce the law. That's not the case in Florida. Florida Statute FSS 316.209 forbids the operation of a motorcycle between lanes of traffic and I don't know of any police agencies that don't actively enforce the statute.

The American Motorcyclist Association is pro lane filtering. They've sent out press releases, and even created a Position Statement, in support of it and urging motorcyclists to get politically involved and contact their legislators to get these bills passed. In part, they said this about the issue, “The AMA endorses rider responsibility and actions that make roadways safer for motorcyclists. Research and evidence suggest that lane splitting may reduce a motorcyclist’s risk exposure.” The AMA points out that “one of the most dangerous situations for any motorcyclist is being caught in congested traffic, where stop-and-go vehicles, distracted and inattentive vehicle operators, and environmental conditions, increase the risk of physical contact with another vehicle or hazard”.

I agree with that statement but I have concerns that granting bikers this privilege would only serve to escalate the prejudices we already experience. Riding a bike anywhere is dangerous but it's extremely risky in rush hour traffic. With all the electronic gadgetry and social media connections people have today, it’s hard for some of them to find time for things like “attentive driving”.  And now you want to be able to slide past them as they sit in traffic staring at their smartphone screens? Maybe they’ll be too busy to notice. But if they do notice, you can be sure more than a few will raise their voices and claim that it’s not fair for a motorcyclist to have that kind of privilege. Among those voices are people who have no concept of how dangerous it is navigating heavy traffic without the benefit of crash bumpers, airbags, windshield wipers, climate controls, and all those other safety features and creature comforts that cars and trucks give you. Motorcyclists don’t dent. We break. We bleed. 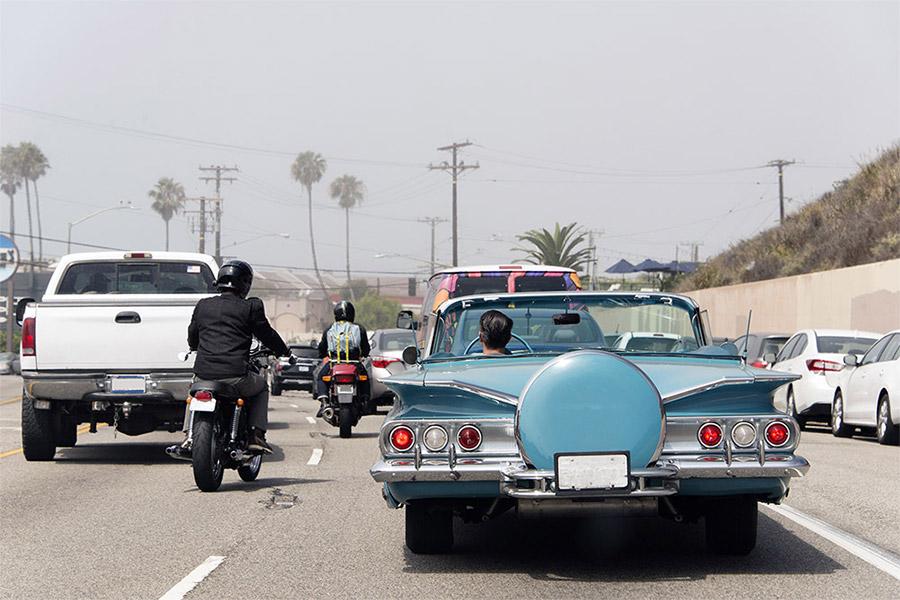 So what about motorcyclists who don’t endorse lane splitting? That is your right and you should voice your opinion if you so desire. But, even if it were to become legal, it won't be mandatory and you’re welcome to continue to sit in that long line of traffic if you want to. Perhaps other drivers will see the benefit and consider switching to two wheels. That would ease traffic congestion.

And then we have the riders-without-brains who will abuse the privilege and make everyone else look bad. All it will take is for someone to decide to pop a wheelie while lane splitting and wipe out on someone’s side mirror. Down goes the rider-without-brains and up go the cries for ending such a dangerous practice.

Lane splitting can be dangerous. It requires your full attention and an attitude that every vehicle you’re passing has a driver who’s not paying attention to your actions. It’s not the solution to every traffic jam but it would be nice to legally have the option.